Native bush birds occur along the full length of the Styx River corridor utilising native revegetation sites, willow-dominated riparian woodlands, and other types of exotic tree/shrub cover. The three most abundant species are Silvereye (Zosterops lateralis), South Island Fantail (Rhipidura fulginosa) and Grey Warbler (Geregone igata), which all have resident breeding populations that are augmented in autumn/winter by an influx of birds from habitats elsewhere.

The Shining Cuckoo (Chrysococcyx lucidus) is a spring/summer migrant, laying its eggs in the nests of Grey Warbler "foster parents". These birds are found mainly in stands of willow, eucalypt and some of the taller native plantings, such as at Styx Mill Conservation Reserve. This species leaves New Zealand in April and migrates to wintering areas on islands in the South-West Pacific. Another cuckoo, the Long-tailed Cuckoo (Eudynamys taitensis) is a rare visitor to the Styx catchmenrt, having been recently been recorded in the Lower Styx Road area near Spencerville. It is also a spring/summer migrant.

Increases in the local abundance and range of two native species, Bellbird (Anthornis melanura) and New Zealand Pigeon or Kereru ( Hemiphaga novaeseelandiae) have been evident over the last decade. Bellbirds were absent until the mid 1990s, but now occur along the full length of the Styx River from Harewood to Brooklands. They are present year-round in some sites and have almost certainly now established as a resident-breeding species, rather than just a winter visitor (as was their status from the mid 1990s to about 2007). New Zealand Pigeons regularly occur (probably as seasonal visitors) in the Brooklands area along the lower reaches of the Styx, and are occasionally seen further upstream, including the Styx Mill Basin area.

Birds of prey in the Styx catchment number three species - the introduced and quite common Little Owl (Athene noctua), as well as the ubiquitious Australian Harrier (Circus approximans) and a very small number of New Zealand Falcons (Falco novaeseelandiae). Over the last few years falcons have been regularly sighted in the area between Lower Styx Road, Waitikiri Golfcourse and Bottle lake Forest.

A wide range of introduced birds occur along the Styx River, including several species of ornithological interest. The Australian Crested Pigeon (Geophaps lophotes) may be establishing in the upper part of the catchment, particularly in the Gardiner's Road area. Groups of up to 6 birds have been sighted regularly, and although these birds have almost certainly escaped from captivity (rather than flown across from Australia), if breeding is proven it will be the first confirmed instance anywhere in New Zealand. Another pigeon, the Barbary Dove (Streptopelia roseogrisea) appears to have established a small population at the other end of the catchment in the Burwood - Brooklands area. The Styx catchment therefore has the distinction of being one of the few areas in New Zealand where four species of pigeon occur (NZ Pigeoon, Australian Crested Pigeon, Barbary Dive and Rock Pigeon).

To ensure that native bush birds are part of the Styx landscape in the long term, consideration needs to be given to their habitat requirements, in particular the shape, size,  spatial arrangement,  and structure of forest habitats. These attributes are discussed in more detail below.

A forest habitat patch should ideally be circular in order to reduce the edge-to-area ratio and thus the 'edge effect', as opposed to linear that is typical of riparian corridors and esplanade reserves.

As a rule-of-thumb 50 metres inside the edge of a forest is adversely affected by edge-related problems. These include a high incidence of exotic plant pest species, greater degree of competition from exotic birds, more wind, higher temperatures, higher light and a decreased soil moisture environment. Therefore any area of land to be considered for forest establishment must take these issues into account and attempt to minimise the edge-to-area ratio of the forest patch.

The functional connectivity of forest habitat patches is dependent on their spatial arrangement. These patches need not be physically adjacent to one another to provide for dispersal of most bush bird species between sites, however they must be near enough to one another to provide a reasonable probability that birds (and other organisms) are able to disperse between them across areas of non-habitat.

While it may not be essential that every large forest patch is physically connected by a forest corridor, a landscape characterised by a series of habitat ‘stepping-stones’ that provide a degree of functional connectivity is desirable. In achieving this, and based on empirical data on plant dispersion and inferred minimum density of forest patches, Landcare Research suggest smaller habitat patches of 1 to 2 hectares in area be no more than 1000m apart, with larger forested areas at 4000 to 5000m distances across the landscape. These guidelines have been considered in conjunction with the tui population viability analysis. Based on this understanding a spatial arrangement of habitat patches across the catchment is illustrated in the attached plan. These patch requirements are being incorporated into overall planning for green corridors in the Styx catchment.

There is now sufficient data on population dynamics, densities, survival rates and other factors to acquire an understanding of what land area is needed to provide for the long term survival of native bush birds in the Styx catchment. An investigation has been undertaken to determine what land area is required, focusing on the tui which is making a return to the city as well as the South Island tom tit. The investigation utilised a technique known as population viability analysis and was performed using the software package ‘Vortex’. This program simulates the extinction process by modelling a range of input data that relate to the biology, life history and behaviour of a particular species, and external influences such as predicted incidence and impact of events such as predation, fire, flood, and disease. Based on these parameters, the software predicts the probability of population success, the degree of genetic diversity and inbreeding depression, the number of individuals in a population and predicted time to extinction. The program models individual forest patches as well as the combined metapopulation, that is the ‘population of sub-populations’ of a species across the study area.

Modelling with Vortex indicates that the current potentially forested reserves in the northern area of Christchurch are not adequate in area to support viable populations of tui. Based on population densities at high quality forest sites such as Tiritiri Matangi in the North Island, the predator free Riccarton Bush alone (7.5 ha), would support just 30 birds and have a long term probability of population success of just 0.006 (0.6%).

Styx Mill Conservation Reserve offers the potential to establish approximately 35 ha of mixed podocarp forest similar to that of Riccarton Bush, but with a lower carrying capacity per hectare in the short term. In the medium term such an area may support a population of 75 tui, however even this number of individuals offers a probability of population success of just 0.1 (10%), even when factoring in inter-patch dispersal between a Riccarton Bush tui population and a similar population at Styx Mill Conservation Reserve. 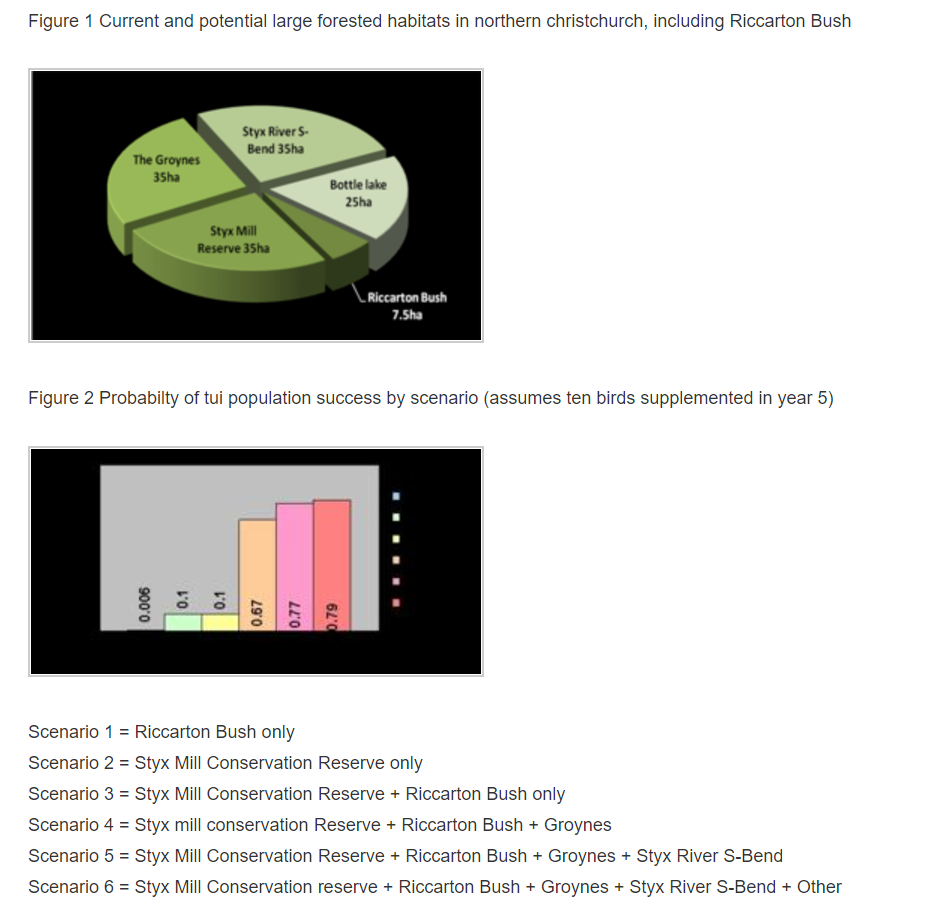 Similarly, in order to establish a viable meta-population of South Island tom tit in and around Northern Christchurch, large reserves capable of supporting robust sub-populations is also important.

Native plant species provide food that assists bird survival through winter. Fruit is an especially important energy source because of its high sugar content. Invertebrates are available all year round with some species having a flush during spring and early summer. New Zealand pigeon and Bellbird eat fruit, flowers, leaves and insects. Fantail, Grey Warbler and Shining Cuckoo eat insects and spiders that often live on native vegetation.