The only records of common smelt are near the tidegates. They are known to form part of the whitebait catch (Hardy 1986) and were at least common in Brooklands Lagoon (Eldon & Kelly 1985). When the water is clear, shoals of these fish can be seen around the tidegates and feeding shoals would penetrate further upstream when the gates are open. 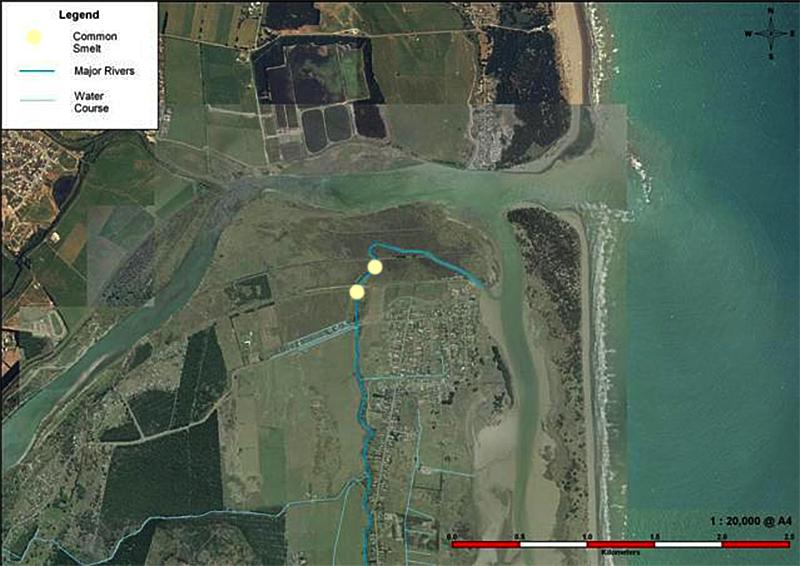 Common smelt have virtually a marine lifecycle.  Different physical differences (vertebral counts) have been reported in smelt from different habitats (McDowall 1990). It seems that smelt that go to sea have more vertebrae than smelt that reside in fresh water. Historically common smelt were deliberately introduced into many New Zealand lakes to serve as a forage fish for the introduced trout fishery.

Smelt are known to spawn on the sand banks of the lower reaches of rivers, and this is likely to happen in the meandering tidal area downstream of the tide gates. They go to sea for a short time and then an influx of juveniles enters Brooklands Lagoon in December and January (Eldon & Kelly 1985).

Common smelt feed on a wide range of invertebrates, although the young fish feed on tiny zooplankton (Boubee & Ward 1997). Chironomid (midge) larvae are likely to be common diet items smelt residing in the  Styx River. A curious aspect of the common smelt is its odour. The fish has an odour exactly like cucumber. Research has indicated that the chemical which produces the odour in both the skin of common smelt and cucumbers is the same. The function of the chemical is unknown, but is also present in other related fish (McDowall et al. 1993). Smelt appear to be a delicate fish, and have been shown to be sensitive to stressors, including low levels of oxygen and ammonia (Richardson 1997; Richardson et al.2001). As such, the species has been suggested as an indicator fish for toxicants.