In recent years Christchurch has seen a renaissance of indigenous wetland birds as a result of riparian and wetland habitat restoration throughout the city. Notable examples include the New Zealand scaup and paradise shelduck; species which until the 1990’s were absent from the urban environment, and normally only encountered in high country lakes and rivers. The New Zealand scaup is now so prevalent in the City, that since the late 1980’s the Christchurch population has increased from an estimated 200 birds to 7500. Almost 25% of the worlds entire population of this species is now residing on Christchurch waterways. Over the past five years paradise shelduck have also begun to re-colonise the city and are now a common sight throughout Christchurch. The Australasian crested grebe; a critically endangered species normally seen only on high country lakes has recently been reported within the Christchurch area on the lower Styx River, Roto Kohatu Reserve, and the Heathcote River.  Well managed, natural environments within urban areas have significant potential to provide good wildlife habitat and offer a critical conservation function outside the Department of Conservation estate. 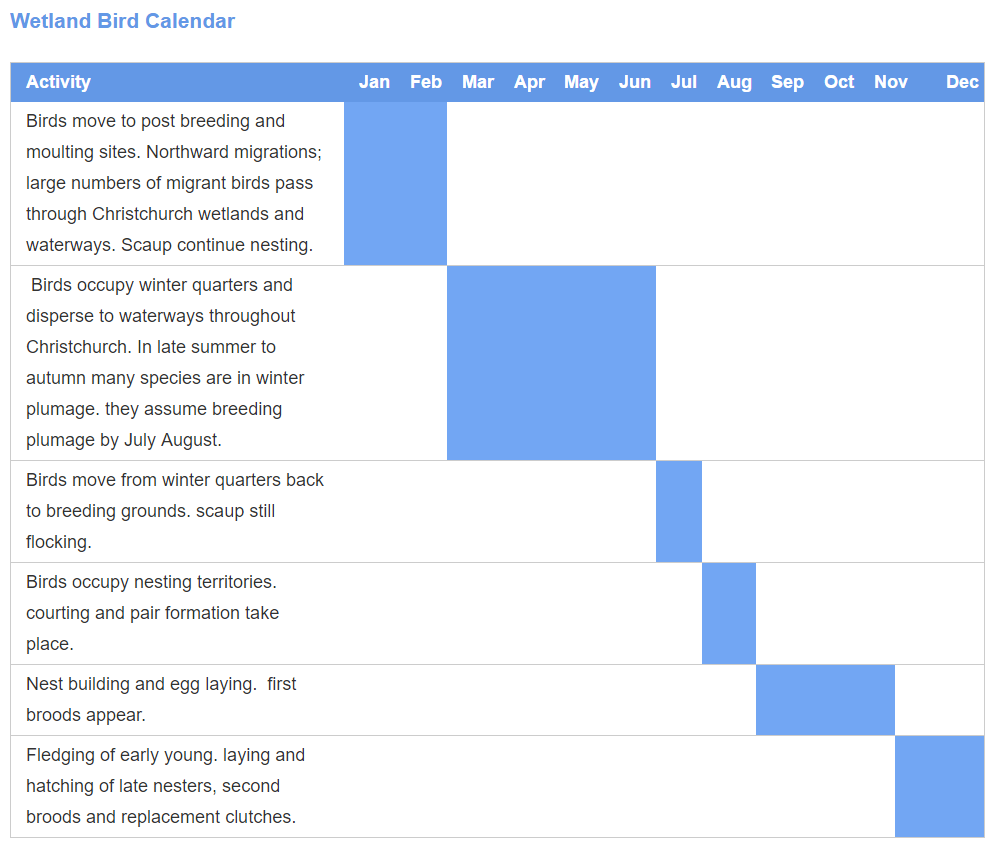 (i)    Protection & enhancement of the river as an ‘Ecological Corridor’

Waterways are natural ecological corridors, providing continuous living habitat that facilitate the dispersal, migration and genetic interchange of populations of many species of plants and animals. Within the context of the highly modified Christchurch City and Canterbury Plains, the Styx River and its tributaries provide an important ecological corridor within the northern part of Christchurch City.  This corridor needs to be protected and enhanced as the catchment becomes urbanised.

Core wetland habitats provide reliable roosting, feeding and breeding opportunities for birds. At crucial times, such as at night and while nesting, they are able to base themselves in these areas and then disperse through the surrounding landscape at other times of the day. Many of the core habitat areas, such as the ponds at Styx Mill Conservation Reserve and Janet Stewart Reserve, have already attracted large numbers of wetland birds.  This has resulted in an increase in bird populations within the Styx Catchment and an increase in bird species richness on those areas adjacent to these core wetland habitats.

Care needs to be taken in the design and development of wetland habitat to ensure that undesirable waterfowl species are not attracted to these areas.  Undesirable species include canadian geese, black swans  and to a certain extent mallard ducks which contribute to poor water quality, fouling of amenity areas as well as posing potential bird-strike hazards.  These issues can largely be mitigated through good design.

Lowlying back waters occur mainly through the actions of the former Christchurch Drainage Board and their efforts to improve drainage through straightening of waterways. These areas provide a series of core habitat “stepping stones” along the length of the river and streams that are utilised mainly by nesting waterfowl, swampbirds, and harriers. These wetlands can also take the form of kahikatea dominated swamp forest where it is desirable to provide forested areas to complement core dryland forest areas.

These areas are created by diverting or restricting flows within the waterway and result in areas of open water that attract mainly waterfowl and cormorants.

These wetlands consist of farm paddocks or sports fields that are flooded after heavy or prolonged rain and waterlogged through the autumn, winter and spring months. These areas are utilised as feeding habitat by the larger waterfowl, gulls and herons, and as feeding and nesting habitat by waders. As with the natural low lying areas described above, ephemeral ponding areas may also take the form of a forested area.

Hinterland wetlands such as Bottle Lake and ephemeral ponding areas (former wetlands in the Ouruhia-Spencerville Road area) have potential for restoration and would support a range of feeding and nesting waterfowl, swampbirds, waders and herons, and again pave the potential for native forest restoration.

Salt marsh and salt meadow predominate in areas that remain, or were once dominated by a tidal flooding regime. The current condition of these habitats ranges from outstanding to highly degraded. They support nesting, roosting and feeding swampbirds, waders, waterfowl and herons.

The Styx River catchment is currently undergoing a rapid transformation from a largely rural catchment to one that is predominantly urban. Within the next 50 years large stretches of the river and its tributaries are likely to become absorbed into expanding suburbs and growing satellite settlements (eg Brooklands, Spencerville) while remaining stretches are likely to border more intensively managed farmland. If the Styx River corridor is to retain its integrity as a habitat for wildlife and as a landscape feature in the long term then buffer zones will be needed to screen river habitats from the impacts of adjacent landuses.

Buffer zones have multiple uses: They reduce the impact of edge effects such as noise, artificial light, pollution, smoke, movement of vehicles, activities of people, and the sense of being closed in.  Buffer zones can also reduce the impact of predatory domestic animals (eg cats, dogs) by making access to core habitats more difficult, and putting distance between  core habitats and the home territories of domestic animals. The effect is that lower numbers of domestic animals penetrate completely through the buffer into the core area. Buffer zones also expand the area of usable habitat available, making long and narrow habitats (such as a river corridor) more viable for wildlife and plants.

Although width requirements for buffers will vary depending on the site, a recommended guideline is to allow 50+ metre width from both banks where the waterway or wetland is below the level of surrounding land and well-screened by vegetation, and allow 100+ metre width where this is not the case.  It should be noted that these are minimum widths, aimed at mitigating edge effects and reducing impacts to more tolerable levels.  Given that cats for example can typically range one kilometre from their owner’s property at night, and are capable of travelling up to 10 km, it is recognized that a fully 100% effective buffer would have to be up to several kilometres wide. This is obviously not feasible so minimum 50+ and 100+ metre buffer widths are a realistic and pragmatic compromise. In many places, other factors such as landscape considerations,  will require buffers wider than these minimums.

To be more effective, buffer zones can incorporate a number of mitigation features including screen planting, impenetrable vegetation, predator-proof fencing and water barriers (moats) and/or live-trap lines. Wherever possible, buffers should be planted with densely foliated native trees and shrubs that complement the core habitats and are typical of forest edges.

In recent years Christchurch has seen a renaissance of indigenous wetland birds as a result of riparian and wetland habitat restoration throughout the city.

Notable examples include the New Zealand scaup and paradise shelduck; species which until the 1990’s were absent from the urban environment, and normally only encountered in high country lakes and rivers. The New Zealand scaup is now so prevalent in the City, that since the late 1980’s the Christchurch population has increased from an estimated 200 birds to 7500. Almost 25% of the worlds entire population of this species is now residing on Christchurch waterways.