Indigenous (native), and endemic fish (found only in New Zealand). Widespread in a wide variety of freshwater habitats from lowland to upper reaches. Longfin eels can penetrate considerable distances inland, as they have the ability to negotiate waterfalls and rapids by climbing over moist rocks.

The national stocks of adult longfin eels in our rivers are reported to be in decline (Jellyman et al. 2000), and the conservation status of longfin eels are in human induced national decline (Hitchmough 2007).

Identified in all tributaries of the Styx River, but rare or absent in shallow waters, or where there is little instream refuge (i.e. logs, overhanging banks) 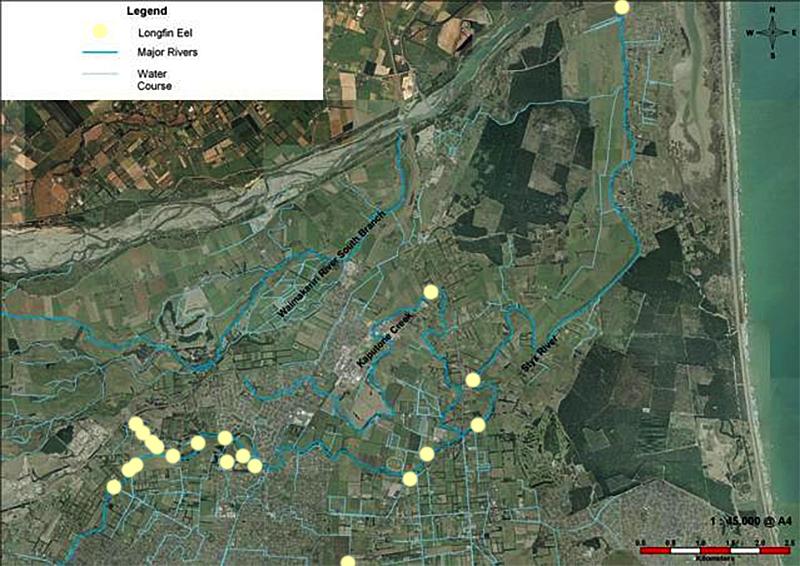 Some aspects of its biology is well known. Like many freshwater eels in the world, longfin eels spawn at sea, returning to freshwater to grow (McDowall 1990). In the natural state, New Zealand freshwater eels are relatively slow growing, and grow only 9-20 mm a year, and with considerable variation in growth rate between habitats and even individuals from the same habitat (Graynoth & Taylor 2004). This is thought to be due to food supplies (fish and invertebrates) limiting growth rates in natural environments. Tank experiments in controlled conditions demonstrate that growth rates can be considerably enhanced, even in cold temperatures, but only if sufficient food is provided (Graynoth & Taylor 2000).

Owing to the slow and variable growth, the length of time before longfin eels migrate to sea to spawn is also variable, ranging between 11-34 years for males, and 27-61 years for females.  Some eels postpone going to sea to spawn and can reach an age of greater than 60 years. Female longfin eels are larger than than male longfin eels. The largest longfin eel recorded from the Styx River is a 1.65 metre long  and found in Styx Mill Conservation Reserve in 2007 (NZFFDB 2007). Smaller eels (that is less than 350 mm in length) feed on insects, but larger eels eat increasingly larger proportions of fish, with the largest eels known to feed at least occasionally on ducks (McDowall 1990).

Mature longfin eels migrate to sea to spawn during mid to late summer, probably to some location in the South Pacific, but the exact location remains a mystery. A use of GPS tags indicated that one migrant longfin eel reached New Caledonia probably en route to the spawning grounds, but the juvenile forms were not identified from this area (Aoyama et al. 1999).

Notes on the eel fishery in the Styx River

The Styx River has supported a modest commercial eel fishery over a number of years. However, since the disestablishment of the Fisheries Statistics Unit in 1987, the fishing pressure or catch from the catchment cannot be accurately determined. However nationally, the pressure on eels stocks, including longfin eels, is considered by experts to be quite significant, even though estimates of eel stocks are not available. Given the decades it takes for eels to mature and leave fresh water, and the potential capture of mature migrant eels, there is a risk of eels stocks being overfished. This is considered be particularly acute for  longfin eels (Ministry of Fisheries 2008).

While little information is readily available on the catch tonnage from the Styx River, the region from which the Styx River forms a part (North Canterbury) the eel catch is small (7.7 tonnes) relative to the total allowable catch (54.8 tonnes) (Ministry of Fisheries 2008).