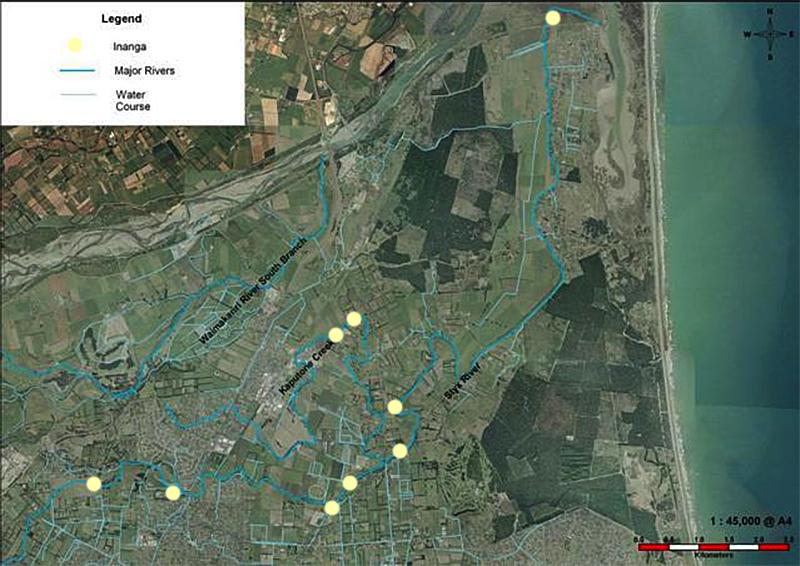 “The coasts abound with fish of large size and good quality, but there is little to be found in the lakes or rivers, beyond eels, a kind of trout of good flavour [possibly referring to giant kokopu], and at particular seasons immense shoals of whitebait, so dense that they can be caught in buckets…”

In the 1880’s,  the Styx River downstream of the tide gates was one of the most popular whitebaiting areas in the Christchurch locality (Hardy 1986). Most whitebaiters favoured a scoop net rather than set nets which were confined to the Styx River mouth. Although whitebait is still fished from the lower reaches, those days of enormous whitebait runs are gone. The Styx River has the advantage of remaining clear and fishable when the Waimakariri River is in flood, another important area for whitebaiters. The tide gates also give added protection, however, they tend to concentrate the whitebait making them easier to catch.

For six months of the year (autumn and winter), inanga larvae develop in the sea, feeding on zooplankton. In the spring they enter the rivers as inanga and mature in the rivers during the following summer. Inanga are a shoaling species, preferring slow flowing rivers and streams with patchy weed cover (Richardson & Taylor 2002). They not only feed in these slow open water areas (Jowett 2002), but the weed beds also enable them to hide from predators and rest from fast flows.

In late summer, inanga form large spawning shoals timed with the lunar cycle, in reaches often well upstream of the tidal influence. These fish then migrate downstream toward the lower river in autumn (Burnet 1965) and then spawn amongst the vegetated areas that are mostly out of the water during much of the tidal cycle. On the Styx River, inanga have been reported as spawning immediately upstream of the tide gates (Figs. 2a,b, 3)(Taylor & Bradshaw 2005). Inanga eggs develop over several weeks above the waterline where they can be vulnerable to damage by stock grazing and trampling in rural areas, and grass mowing in urban reaches (Taylor 2002). Fencing and avoiding mowing grass during the late-summer and autumn months can avoid this type of damage. On the Styx River, inanga spawn in the habitat restoration site to the west of the floodgates and are therefore not vulnerable to being grazed by stock or mown. As the native plants mature and become more established, habitat for inanga spawning in this area will improve.