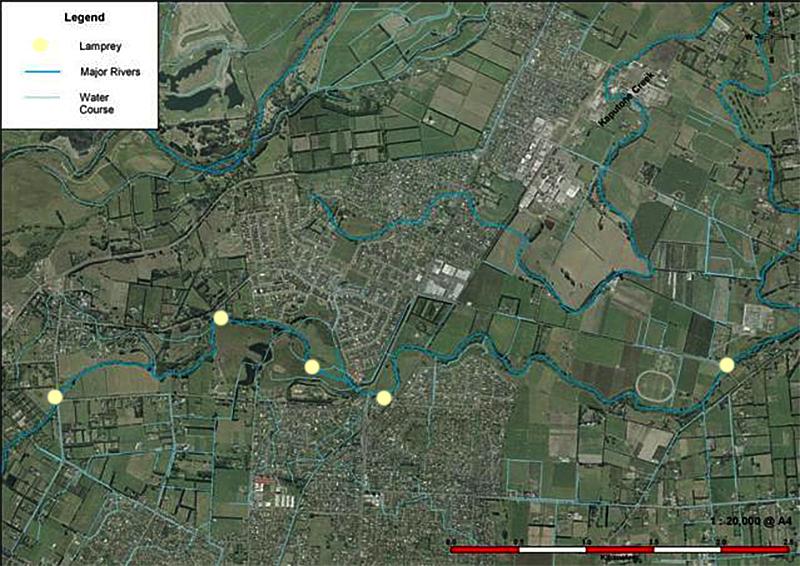 The adult lamprey (or kanakana) used to form an important Maori fishery in some South Island Rivers. It is known that lamprey were caught from the nearby Kaiapoi River (Anderson 1988), and they may have been fished from the Styx River as well. There are still traditional fisheries (Mahinga kai) sites in the Mataura River and elsewhere in New Zealand (Jellyman et al. 2002).  Elaborate weirs and traps were made to capture migrants, and descriptions and photos of these techniques can be found in McDowall (1990).

The southern lamprey is a primitive fish-like animal with a bizarre life cycle The juveniles, called ammocoetes,  live in river silts, where they filter feed for on average about 3.5 years (Kelso et al. 1993; Todd & Kelso 1993). The juveniles metamorphose and go to sea, where they parasitise marine fish and mammals. After some years at sea, the  adults return into freshwater to spawn (Jellyman et al. 2002). In 1999, a migrating adult lamprey was identified in that stretch of the Styx River located within Styx Mill Conservation Reserve  (Eldon & Taylor 1990). The presence of ammocoetes indicates that at least some lamprey spawning still takes place in the catchment.

In recent years, lamprey spawning has been researched, including the radio-tagging of individual lamprey in Okuti Stream in the Lake Forsyth catchment (Jellyman et al. 2002). The results of these and other studies indicate that lamprey are likely spawn within stream gravels or boulders in the upper reaches of rivers (Kelso & Glova 1993).