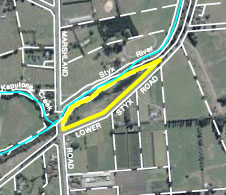 Edward Stewart bequeathed the land to the Christchurch City Council in 1993 on the condition that it became a reserve named in honour of his mother, Margaret Jane Stewart, or Janet as she was commonly called.

Janet Stewart Reserve is one of the earliest examples in Christchurch where a ‘values based’ approach to the restoration of a waterway and wetland was used. This approach recognises the following values: ecology, heritage, cultural, landscape, drainage, and recreation.

Born to Margaret Pope at Governors Bay on 25 September 1896, Janet was the third daughter of a family of five girls.  She spent her early years at the family home in Governors Bay. On 24 September 1919 she married John Henry Stewart who had recently returned from four years active service in World War I.

Bringing up a family in those days was not an easy task; cooking on a coal fired range, churning your own butter, and washing clothes in boiling water maintained by a fire-fed copper.

In addition to caring for the family, Janet rose early and by 5.30am would be in the cowshed alongside her husband as they milked the cows by hand.   This she did morning and evening until a milking machine was finally installed in 1945.

During the Depression years in the 1930’s when Janet and John were unable to continue selling milk to vendors, they commenced selling direct to the public in the suburbs of Papanui, St Albans, Shirley and Richmond.   Milk was then sold for two pennies (tuppence) a pint, or four pence for a quart.

It was not until the 1930’s that the Stewart’s purchased their first car – a half-ton Ford.   Prior to that time they traveled the shingle roads by horse and cart, later progressing to a motorcycle and sidecar.

On 19 July 1946 Edmond purchased a 5-acre property on the corner of Marshland & Lower Styx Roads.  At that time this low-lying land was covered in rushes and frequently flooded.   During the mid forties John (junior) and his bride Jean lived in the original cottage of four rooms with its adjoining bathroom/laundry. At a later stage, during the 1950’s, Bruce and his wife, Doreen, used this cottage as their home.

Edmond (who never married) and his younger brother Roy cleared the property of rushes and cultivated it, at one time growing onions and a type of cow fodder called mangolds.   Eventually the cottage was demolished and the whole area sown in grass. For more than thirty years the grass was used for making hay and grazing cattle from the family farm along the road at 119 Lower Styx Road.

On 25 August 1993 a letter from the New Brighton Law Office was sent to, “The Town Clerk, Christchurch City Council”, advising that Edmond Charles had died on 10 July 1993.    In his will he had bequeathed to the Council the property at 8 Lower Styx Road, Christchurch “for the purposes of a reserve to be named “Janet Stewart Reserve” in memory of Mr Stewart’s mother.”

Family members remember their Mum, Janet, as being a hard worker who possessed a well-developed sense of humour.   Even when times were tough during the Depression years she always had a meal on the table.   These occasions, often shared on Sunday with relatives from the city, were a “time of lots of laughs.”

Janet Stewart Reserve, on the corner of Marshland and Lower Styx Roads, now stands as a son’s tribute to his resourceful and hardworking mother.

The Janet Stewart  Reserve, covers an area of 1.9 hectares, is situated on the corner of Marshland Road and Lower Styx Road and runs parallel with Lower Styx Road for approximately a kilometre.

Historically, this landscape was covered in native vegetation, including ferns, tussock and raupo, and formed part of the Styx River floodplain. Middens on the site indicate that early Maori used this area. As farming in the locality developed, the land was converted into a low-lying grassy paddock, intersected by a channelised boxed waterway known as Gibson’s Drain.